The Mighty Crusaders are coming back (using a series of posts by yours truly as inspiration????)

From what I’ve read here, the DC bigwigs have read my “If DC ever created the own FF” series of posts (collected here, here, and here). Please leave your “way to go 1truegl!” or “You are so awesome...” or “You truly ARE the One True GL...” in the comments, to which I will modestly reply “Why thank you, commenter, I was merely doing my blogger’s duty and you’re awesome for telling me that I’m awesome.”

This Mighty Crusaders line-up will feature The Shield, Hangman, The Web, and Inferno. Yup, that’s four. Choke on that, Marvel! You don’t own the rights to the four-hero team as concept like your propaganda says you do. 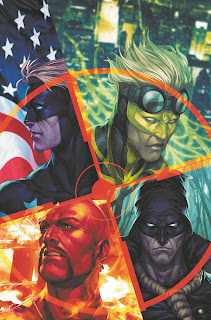 I’ve been aware of the Red Circle characters for many years and even red the backend of DC’s Impact comics back in the 90s, so I’m familiar with previous incarnations of the Crusaders that have traditionally featured larger rosters. In fact, in Final Impact (the swansong of DC’s Impact Comics imprint), there were a lot of cool developments with the The Shield (two brothers share the persona at the time).

I didn’t read the JMS one-shots, but I’ve heard that they quite different from the originals and the Impact Comics versions.

Of course, Didio has said that they were going back to the original versions or use them as strong inspiration for the new titles. So, I thought the heroes might turn out to be vastly different...

The heroes are they were and as they are now:

The Shield:
Basically, the source of his powers (his suit) was similar to Iron Man in one of his incarnations (decades before Iron Man existed) and his origin (serum experiment) was identical to Captain America (a year or so before Cap existed) in another incarnation. The Impact line of the 1990s went the suit-powered hero route. Now, he’s nanite-powered techno version of the Detroit-league Steel.

Hangman:
Hangman is creepy guy who carries a noose (not a lasso, a noose). Now, he’s more supernatural and immortal.

The Web:
Originally, Web was a criminology professor who fought crime in his spare time, all in an attempt to understand the behaviour of his bad seed bro. Now, he’s apparently a do-gooder who gets his missions from the internets.

Inferno:
I was never really into Inferno (hardly remember the character), so I can’t really make any comparison. I hear that the present day version has fire powers and a mysterious past.

Of course, 1truegl would have gone a different way in terms of reworking of the characters’ origins (and powers and motivations) as well as the roster.

The big question on my mind: Where is Blackjack and will DC keep his much adored origin?*

For those of unfamiliar with Blackjack (a non-powered vigilante) or his origin, I’ll repost my thoughts from a comment thread right here:

Blackjack has a dull origin (that I’ve tried to mentally block out, so this could be wrong): Dude gets locked up by robbers but manages to escape by using a playing card [Ace of Spades, i think]. Dude goes, “Ace of Spades saved my life...I think should become a masked hero as a tribute...” For real, I think that’s the gist of it...

Maybe I should look up Blackjack’s origin, because I might’ve been hard on him...
Posted by The One True GL at 2:00 AM