As promised, this post constitutes my thoughts on Reboots in comics. As a bonus, to make the model more scientifically robust, I’ve also included other comic Inter-Comic-Bigwig-Writer outcomes of the Retcon as well the new flavour of the month, the Rebirth.

I give to you the result of exactly 20 minutes of painstaking scholarly research, a normative decision-making model in the style of a new-writer-interview-excerpt plus some occasional fanboy intrusion, I have christened as...drumroll...the Theory of Retcons, Rebirths, & Reboots Involving Comics Kaboom Decision-making (a.k.a. TRRRICK’D). Enjoy! 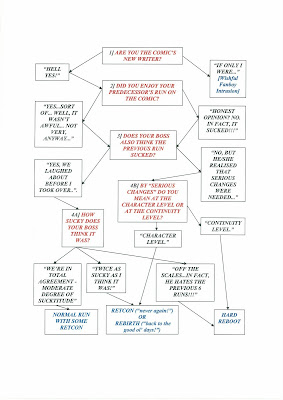 This is just a Theory, probably more accurately viewed as a model and thus a simplification of an aspect of reality. So, I've excluded possible Hollywood franchise considerations as well as special continuity (such as Legion). Also, with the inclusion of the Rebirth outcome, the model is more applicable to DC Comics. Well, only slightly. I'll also throw in my observation that the Rebirths of Green Lantern and Flash (explicitly) and Green Arrow (not named a rebirth) were fixing somethging that was not necessarily broken. Kyle Rayner, Wally West, and Connor Hawke were (and still are) great characters who were NOT less popular than Hal Jordan, Barry Allen, or Ollie Queen. Only saving grace about the rebirths is that they didn't kill off Kyle and company. What can I say about Reboots? Well, the only problem I have with them is that there are too many of them.Retcons are okay, if they are targetting the right elements. How about permanently wiping Bouncing Boy out of existence? Feel free to print and/or disseminate this theory...We must warn others!
Posted by The One True GL at 11:54 PM