Okay, here goes...I’m a Firestorm fan. In fact, Firestorm may actually have been the first in-comic-book-discovered DC hero that I found awesome.

For some inexplicable reason, I’ve only mentioned Firestorm once in passing on this blog and equally as worrisome is the fact that one of my few comics-loving offline friends had no idea I was a Firestorm fan. We’re talking about friends since the early 90s here...Strange. 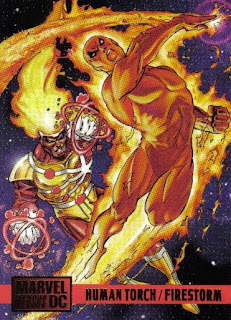 Firestorm and Human Torch, dynamically drawn by Adam Kubert.
This little disclosure session was brought on by Firestorm’s...er...Ronnie’s return to the ranks of living heroes. Basically, I’ve always seen Firestorm as a hero with a lot of promise and someone who should always be on the shortlist for Justice League membership.

Speaking of which, if we ever get a JLA (the big guns) and JLI (Booster and co) co-existing on a permanent basis, Firestorm should have membership on both teams (in an “inter-team liaison” capacity).

Just bear with me out for a minute while I attempt to explain my thinking.

Some of you might rightly point out that if such a situation came about, J’onn would be the natural choice for inter-team liaison since he has history with both incarnations.

Such a point has merit, but Captain Atom will likely lead the JLI and he has never seen eye to eye with J’onn on League matters. That won’t be a smooth relationship and will likely be seen by Cap as some elitist interference from on high.

Okay, so why Firestorm? Well, it has to do with Firestorm’s new status (both Jason and Ronnie being Firestorm) and the way both are being written (so far). Since Ronnie is a frat boy-ish, brash dude now and Jason is more mature, Ronnie should take control while at JLI and Jason should take the wheel at JLA. Sure, Batman didn’t exactly make Jason feel at home when he was on the team, but at least he didn’t get one-punched. Ronnie might not be so lucky. Also, Ronnie didn’t cover himself in glory when he last followed Captain Atom’s orders. Maybe Ronnie has something to prove to Cap? Of course, I’m assuming Ronnie and Jason will be able to do the “You like it there, so you drive” thing. Big assumption.

Another thing, I liked Martin Stein as the floating head, but the Jason-Ronnie combination presents a lot of possibilities in terms of commentary. Firestorm is one of the characters that can get away with saying one thing while thinking another on a continual basis and not be thought of being disingenuous, because it’s two people in there. Add to that both Ronnie and Jason are opinionated (although in different ways) and a comic writer has got Firestorm-other-interaction gold. I mean, I get the feeling that Ronnie and Jason admire or dislike or are indifferent to different leaguers.

Of course, they have a lot of fall-out to work through before any of this could happen...
Posted by The One True GL at 8:24 AM