I have a few trading card sets lying around the house and one of my big regrets is that I didn’t buy more of the DC vs. Marvel collection, because (a) they were awesome, (b) they were drawn by a variety of top-notch artists, and (c) some of those two-character images might never be seen again due to respective continuities (characters dying or being replaced). 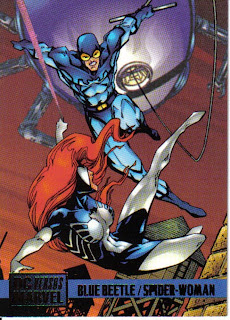 Blue Beetle (Ted Kord) and Spider-woman (Julia Carpenter), as drawn by Jim Calafiori.
Speaking of Spider-woman, in a post in which I referred to the Jessica Drew version of Spider-woman, I misquoted the Great Spider-man Paradox. By the way, both Spider-women exist at the same time on the same Earth with no trouble at all and there is/was even a third Spider-woman in the Marvel U – hint, hint, DC? Cough...Blue Beetle...cough...

Anyway, I went through an old file (really a big collection of pieces of paper) and discovered the Hypothesis’ original formulation. For one thing, it’s not called the Great Spider-man Paradox, but rather The Great Spider-Hawk Exception. There are extra hawk bits that I omitted.

Here is The Great Spider-Hawk Exception:

Until next time, make mine multiple heroes with the same name!
Posted by The One True GL at 8:10 AM