Short Fiction about Superheroes: An anthology by another name...

A while back I wrote this post about “With Great Power”, a superhero short fiction anthology edited by Lou Anders. It features stories from the keyboards of Gail Simone, Peter David, Mike Carey and other comic book writers.

Well, while I was being a bad blogger (and had my back turned on the superhero comics / prose worlds), Spider-man’s owners did what they do best and said: “Hey, that’s what Uncle Ben told Peter...Well, half of it at least...Anyway, where were we? Oh yes, Mister Anders, you can’t name your anthology that...Everybody knows that Marvel owns those three words in that order. Bottom-line: You are hereby instructed to rename your anthology something else and preferably nothing starting with the uppercase letter “X” as Marvel owns that as well. Have a nice day.” 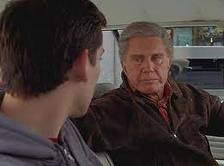 Peter and his Uncle Ben uttering copyrighted...um...utterances
Anyway, the anthology is now entitled “Masked”. Here’s a short article about it, which doubles as a great teaser (stories like “Cleansed and set in Gold” and “A to Z in the Ultimate Big Superhero Universe (Villains Too)” sound even more intriguing to me having read this write-up). I also found the comments to the article spot on with regard to the benefits / risks to superhero prose (especially those proffered by commenters 214w, Tina Sena, Lou Anders himself, and Powerful Lamp).
Posted by The One True GL at 4:20 AM